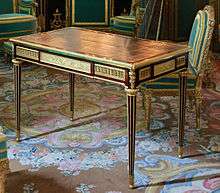 A writing table (French bureau plat) has a series of drawers directly under the surface of the table, to contain writing implements, so that it may serve as a desk. Antique versions have the usual divisions for the inkwell, the blotter and the sand or powder tray in one of the drawers, and a surface covered with leather or some other material less hostile to the quill or the fountain pen than simple hard wood.

In form, a writing table is a pedestal desk without the pedestals, having legs instead to hold it up. This is why such tables are sometimes called leg desks.

The writing table is often called a "bureau plat" when it is done in a French style such as Louis XVI, Art Nouveau, etc. When a writing table is supported by two legs instead of four, it is usually called a trestle desk.

The writing table is also sometimes called a library table, because it was often placed in a rich individual's library. This was the room in a house where a gentleman would keep literature and also do his business transactions. The library often housed, in addition, a round desk called a rent table and sometimes a drawing table. The term library table is sometimes applied indiscriminately to a wide variety of desk forms, in addition to being used for writing tables. Let the scholar or the buyer be wary.